Hyphen-21 is a UK charity. It was set up in 1994. Its aim : to articulate and advocate for the qualities, skills and conditions required for helping people in emotional or other kind of difficulty, particularly people on the edges and outskirts of society.

How the charity began

It was formed at the suggestion of Phyllida Parsloe, then Professor of Social Work at the University of Bristol. She proposed it as an independent voice for a principled “social work” stand-point, in response to different events and developments in our fractured society, as these occurred. Through the consistency of its responses, offered over time, it would aim to establish and clarify, and win authority for, its stand-point and approach. Abstract statements of aim or intent, or codes of conduct set out in absolute terms, would be insufficient.

The implications of this approach seemed more general and more important than the status or purpose of the particular profession of social work. Can relationship of its own be healing ? Are skills required in that process ? If so, what skills ? Are they innate, or can they be taught, developed, improved, through training and practice ? And does empathy play a part in this ? We say that word, and perhaps yearn for it, but what really is empathy ? Is it powerful ? But how so ? And is it material ? What helps empathy be effective, a positive force ? What hinders it ?

The above is just a list of questions. But of course, the small circle of people responsible for setting up the charity had some of their own answers and saw a prioritising of empathy, for instance, not just as necessary to a healing relationship, but as central to any healthy community. The charity’s very title derives from that notion – the hyphen is a between construction. I and you others, or other, create it, or arrive at it, together. It connects us and makes something new. For “Hyphen-21” is actually a reference to a book by the late Martin Buber called “I and Thou.”  Throughout that book, he posits two necessary human positions and forms of relationship, like the two poles of one planet ; he names them “I – It” and “I – Thou.” It is the hyphen between I and Thou with which this charity is chiefly concerned, as being the more central and difficult and the more grievously under threat in our time. (The number “21” in our title refers of course to the present century). Truth must be served and told on the hyphen between I and Thou. The lie and puerile slogan are only possible on the hyphen between I and It.

The charity’s founders never conceived of it as an agency that would actually own or run anything, as such. Instead, it would seek to do its work by highlighting particular initiatives associated with good practice, excellence of approach. Let these make the case and do the real talking. The charity would identify, stand for, promote, seek to support.

This Home page has been revised in the summer of 2022. This summer, it cannot be said, of course, that the shifting of priorities we had hoped for nearly thirty years ago has taken place. Quite the contrary. The tendencies we saw and feared in the early 1990’s have carried on growing in strength ever more rapidly. In the meantime and always present, the threat of uncontrollable global warming looms ever larger and closer. Political structures capable of dealing coherently with contemporary events and developments continue ever more incapable and ever more anachronistic. The UK’s present government seems more concerned to make an open smirky mock and posture of good governance, than to govern.

So this charity cannot claim to have been a significant change-agent or even presence. That, however, does not make it a mistake or irrelevant.

What the Charity Does

Over the years since its founding, Hyphen-21 has changed a great deal as well, in some ways unexpectedly.

For instance, we thought it wouldn’t run anything. In fact, for more than 20 years, it has been running an international  project supported by numerous funding bodies, including  the UK Arts Council, the NHS, the King’s Fund, the John Lewis Partnership and the UK Foreign Office. The project began off being called “Poems for the Waiting Room.” Now it is called “Poems for…the wall.” For a while, the Project shared this website, but then, in 2008, the UK Poet Laureate of that time, Andrew Motion, launched a website designed specifically for “Poems for…the wall.” Now, all the poem-posters presently available can be downloaded from there, free of charge. Many of them are bilingual, with over fifty languages represented. At the time of writing, this number is soon to increase. The site’s address is https://poemsforthewall.org

Also, for a while, this website featured and promoted particular initiatives in the community. These were often under the heading of mental health social work. But we have decided that, for maximum effectiveness and clarity, these too should have their own website, to be called “Better mental health working.” Eventually, that site will go live and this one will link to it.

And this Hyphen-21 site will continue in that role – on the one hand, as a set of general statements of principle (see “Background” above) ; on the other hand, as a kind of doorway, or antechamber, or directory, to the various topics and initiatives with which Hyphen-21 is now concerned.

Finally, I want to refer here to the late Mary Young. Mary was a psychotherapist and historian, amongst other things. From first to last, she was also a Hyphen-21 Trustee – from the charity’s launch to her own death in 2012. And in addition and to a large degree, she was both my supervisor and soul-mate. For a while, Mary’s biography of Augustin Robespierre, a serious piece of original research, beautifully written, but only recognised as such a few months before she died, was available on the website of Kingston University. It has now been taken down, due to the university’s radical reduction of its history department. With the permission of Professor Marisa Linton, whose enormous help in this business needs to be acknowledged, I am linking to Marisa’s updated pdf of Mary’s book here.

And here let it stay, at least until it finds a more suitable and more permanent home. If anyone is interested in buying the paperback book of Augustin, I have a handful of copies available.

And here is a poem called “Augustin Doing Life.” It was suggested by this curious and rather beautiful story which brought together the lives and times of Augustin Robespierre and his biographer Mary Young, each drawing the other into the light. 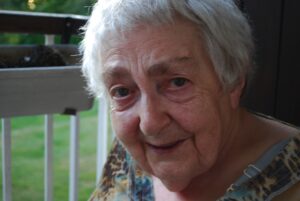 Hyphen-21 is a registered charity and a company limited by guarantee.

Code of Conduct for ward rounds

“The Department of Health welcome[s]… the Code of Professional Conduct for Ward Rounds and Similar Meetings. [This] is an example of good practice it would want to support…” Julie Nichols, NIMHE

The Code is here

The Commission for Health Improvement (CHI) found Hyphen-21’s model of a separate recruitment panel of service users “an example of notable practice…worthy of sharing..across the NHS.”

Click here for an article in the magazine “Openmind” which describes the model.

“We feel that Hyphen-21 is doing some very important work designed to connect people to people, and people to community – their work on a code of good practice for ward rounds and their “Poems for the Waiting Room” project are particularly potent examples.”  Consumer Consultancy (Brighton)

“ I initially accessed your site as I was interested in your Poems for the Waiting Room project. However I am now really impressed by the other projects you have set up…I would like to express my support for your charity.”  Sheena MacKenzie, Turning Point Worcester Druglink

Poems for the wall is a project which Hyphen-21 has been managing and overseeing for over twenty years. The poems are formatted as posters and made available online free of charge ...
Read More

Clifton (Roman Catholic) Cathedral was built in a Bristol suburb in the 1960's and 70's. You can find it near the Brunel suspension bridge, looking massive and unexpected. In the Spr...
Read More

A very good international magazine called "Resurgence," based in Devon, did a feature on the project in July this year. Click here for the online version. And during November, an exhibiti
Read More